LATEST: We Are Not Amused
An exhibition at The Atkinson, Southport, exploring nineteenth century laughter.

EHU Nineteen is home to a diverse range of interdisciplinary research projects.

Substance Use and Abuse in the Long Nineteenth Century

Fantastic Beasts and Where to Print Them

The EHU Nineteen Seminar Series combines the Romanticism and Victorian Seminar Series which have run from 2010. The Seminar Series invites research papers from established scholars and emerging researchers on topics as wide-ranging as eighteenth-century Gothic texts and orientalism to girls’ periodicals and Victorian audiobooks. For further information, please contact: Andrew.McInnes@edgehill.ac.uk

Our seminar series for 2020-2021 will take place virtually via pre-recorded talks and live Q&A discussions on Zoom. To learn more about these events, and to book your free tickets,  please follow the Eventbrite links below.

“For the last 20 years, I’ve been spending summers in Chamonix. For much of that same time, I’ve been writing about the role of Chamonix in Romantic-period literature. In this talk, I reflect on going back to that place and back to those texts in 2020.”

Pre-Recorded Talk followed by a Live Q&A on Zoom at 6pm (UK).

Register for free tickets to receive a link to the talk and an invitation to the Q&A.

This talk considers how Clare explores the aesthetic, emotional, and ethical facets of carelessness. It asks what negligence has to do with writing poetry at the same time as it examines how Clare wrote about the social and ecological consequences of not caring.

Pre-Recorded Talk followed by a Live Q&A on Zoom at 6pm (UK).

Conference: Substance Use and Abuse in the Long Nineteenth Century

This two day interdisciplinary conference examined the changing roles of drugs and chemical substances in the history, literature, and medical discourses of the long nineteenth century. 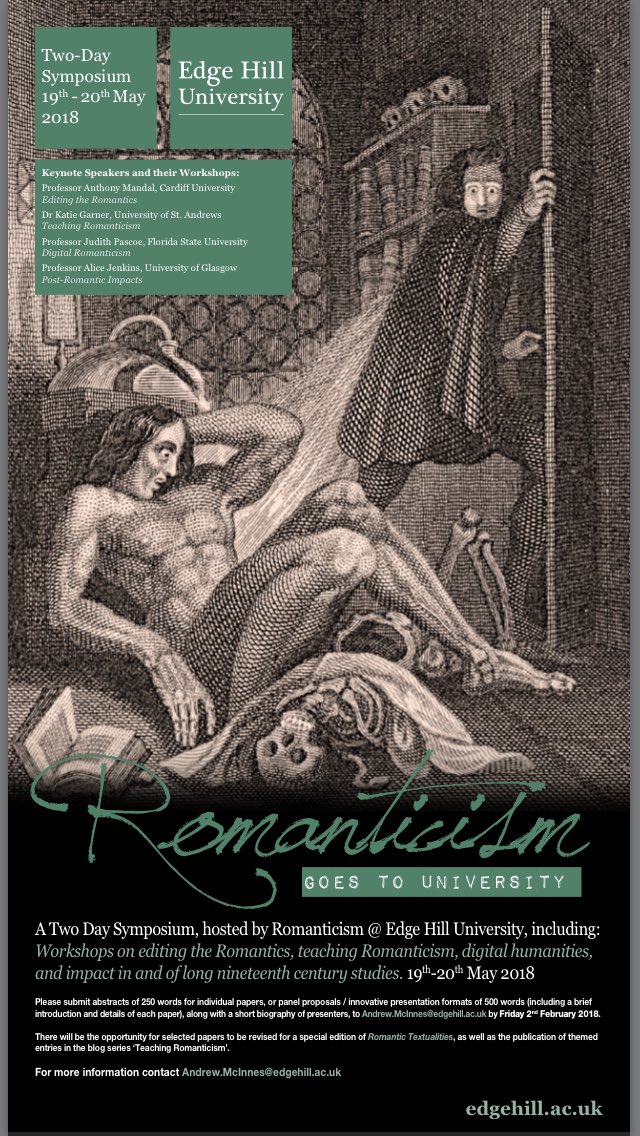 A Two Day Symposium, hosted by Romanticism @ Edge Hill University, including workshops on editing the Romantics, teaching Romanticism, digital humanities, and impact in and of long nineteenth century studies

Byron’s bear, kept in his student room to challenge the ban on pets – Shelley’s expulsion from Oxford, for refusing to recant the atheism expressed in his provocative pamphlet – Victor Frankenstein as the undergraduate from hell – women writers debarred from university tuition but developing new models of mentorship in relation to Dissenting academies and other institutions: the university has an awkward reputation within Romantic period writing, becoming a symbol of authority and tradition to be resisted and challenged. On the other hand, ‘Higher Education’, broadly considered, occupies a significant space within Romantic thought, offering the potential for self-betterment and social improvement in revolutionary ways, from poetry embodying a radical call to arms and prose reconceptualising individual and national identity to print culture more generally offering a newly democratic public space of opinion formation.

‘Romanticism Goes to University’, a two day symposium hosted by Romanticism @ Edge Hill University, aims for a two-fold focus: firstly, a space for discussion and debate about the role of higher education – pedagogy, didacticism, the Romantic lecture and essay, and the university as an institution – in the Romantic period itself; and secondly, an opportunity to scrutinize the state of the discipline in today’s university: what does it mean to teach and research Romanticism now? How is the Romantic period presented in undergraduate and postgraduate programmes? What are the major trends in Romantic research at the moment? To what extent does what is taught in Romantic period courses reflect and / or motivate research?

Alongside academic papers and panels, our symposium will offer a space to discuss teaching and research concerns through a mixture of expertly led workshops and roundtable discussions. These workshops will be of especial interest to Postgraduate and Early Career Researchers, although more established staff would be more than welcome to attend.

Keynote Speakers and their Workshops:

Proposals for individual papers, panels of 3 speakers and a chair, or innovative presentation formats, are invited on the following topics (although they are certainly not limited to them):

– poetry, prose, and print culture with educational and / or otherwise transformative aims

– the Romantic period in the undergraduate and / or postgraduate classroom: canonicity, representation, diversity, the challenges of the Teaching Excellence Framework, student satisfaction and its alternatives, employability

– new approaches to Romantic studies, including, but not limited to: digital humanities, the spatial turn, the international turn, the affective turn, medical humanities and disability studies

– publishing and / or editing in and on the Romantic period

Please submit abstracts of 250 words for individual papers, or panel proposals / innovative presentation formats of 500 words (including a brief introduction and details of each paper), along with a short biography of presenters, to Andrew.McInnes@edgehill.ac.uk by Friday 2nd February 2018.

There will be the opportunity for selected papers to be revised for a special edition of Romantic Textualities, as well as the publication of themed entries in the blog series ‘Teaching Romanticism’.

Edge Hill University has an excellent reputation for teaching and research in Romantic Studies. ‘’Romanticism Goes to University’ will build on the success of our previous symposia, ‘Edgy Romanticism’ (2016) and ‘Romanticism Takes to the Hills’ (2017), as well as the Romanticism @ Edge Hill research seminar series (EHU 2010-present) and our postgraduate conferences, co-hosted with Keele University: the Student Byron Conferences (EHU 2011-13), ‘Byron and the Romantic World’ (Keele 2016), and ‘Writing Romantic Lives’ (EHU 2017).

Conference: Romanticism Takes to the Hills 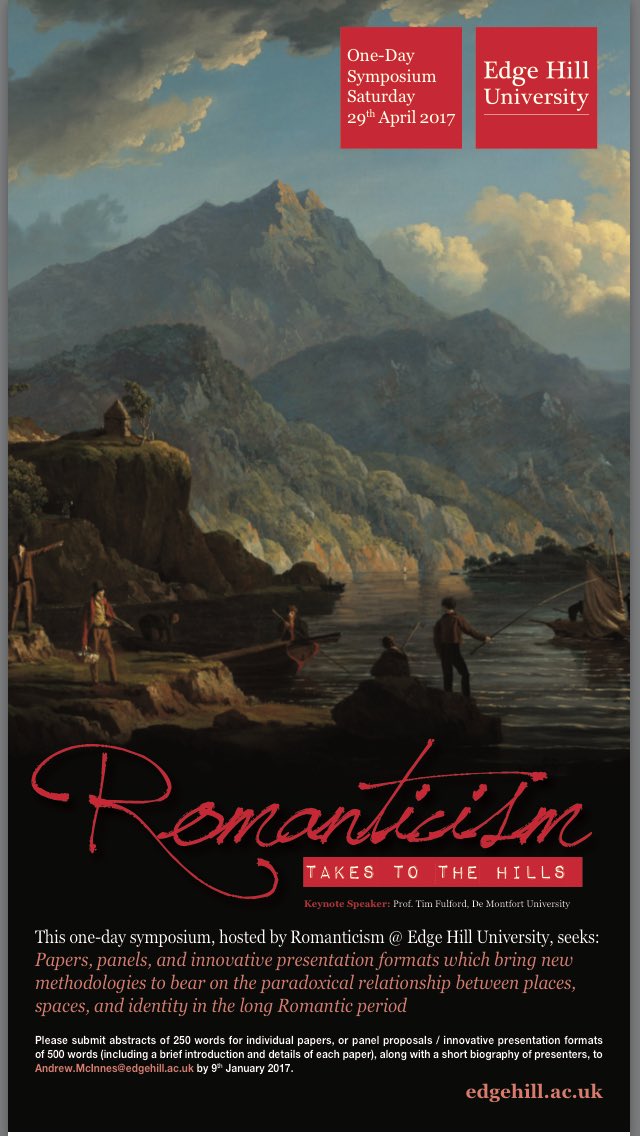 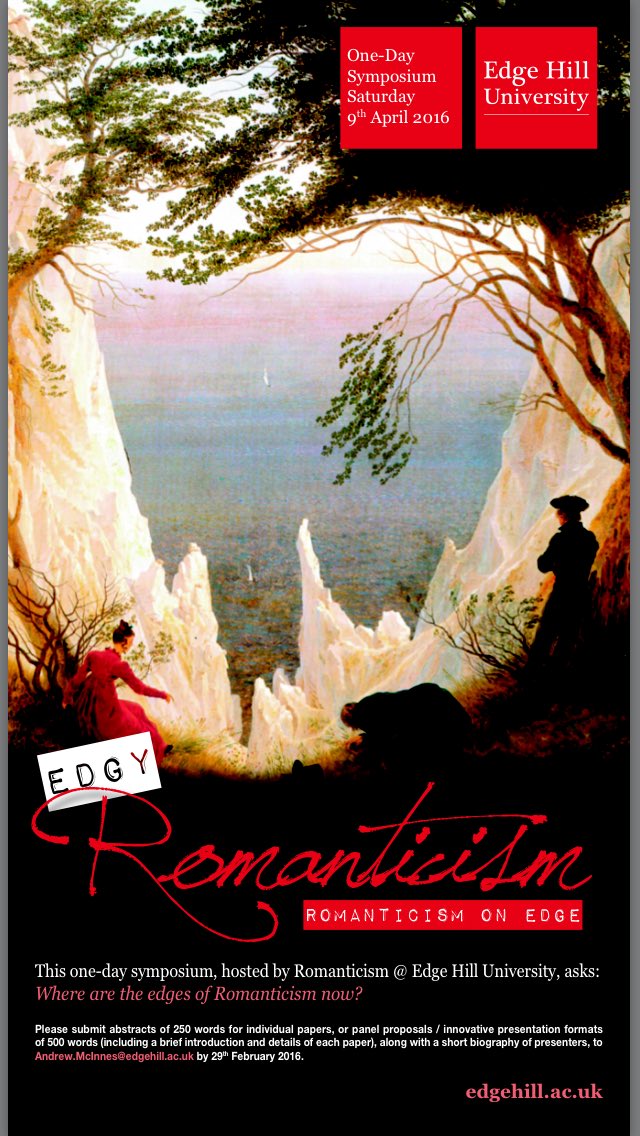 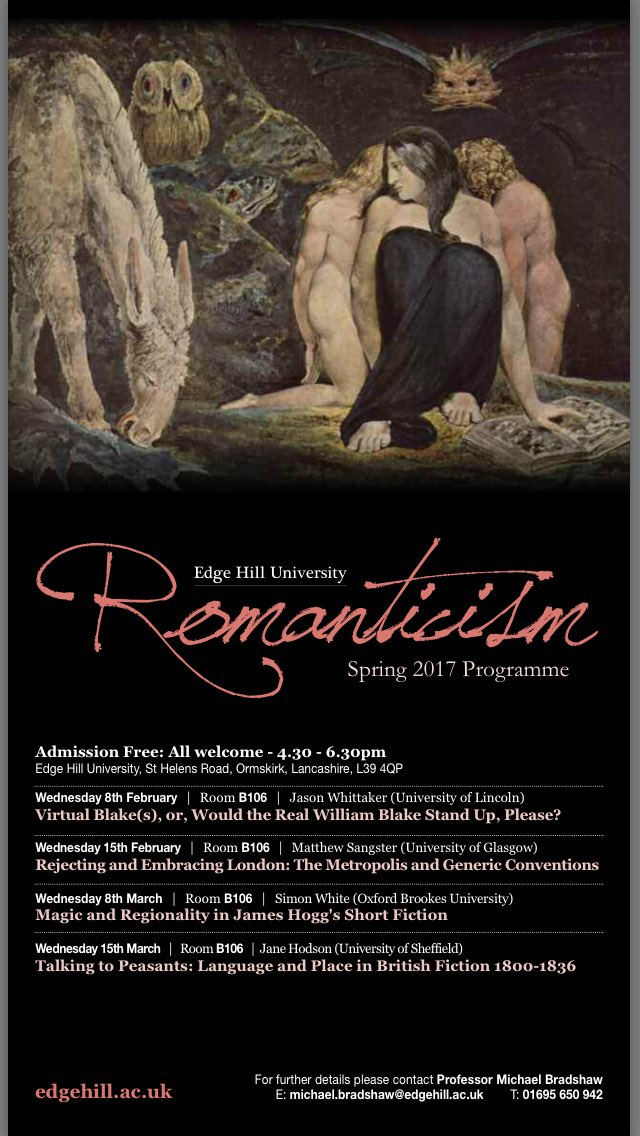 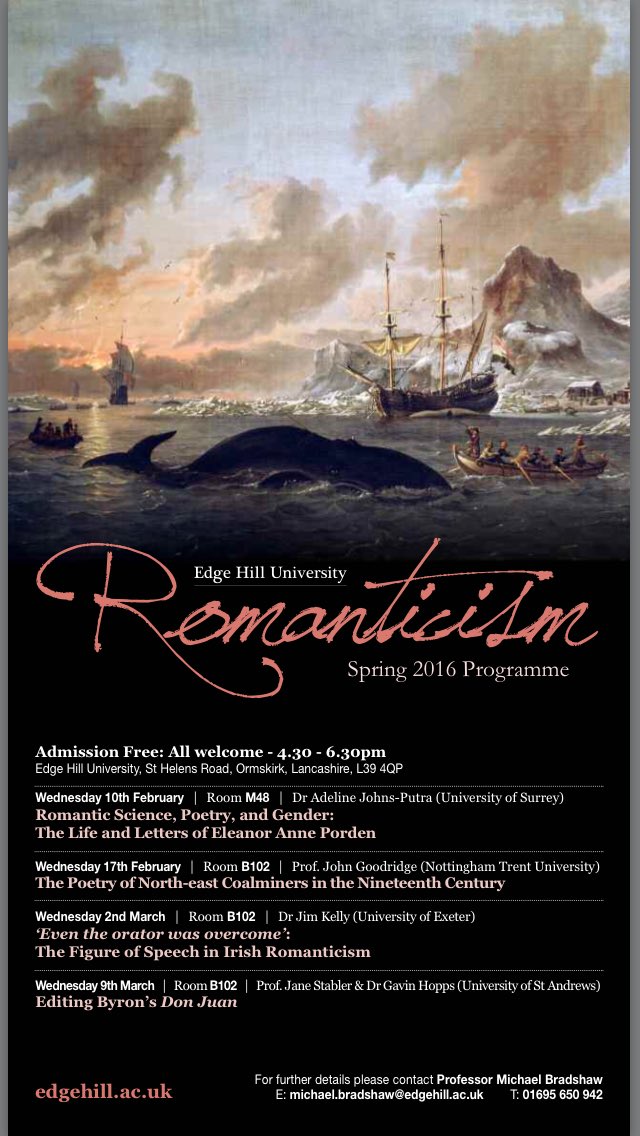 Each session will take place on Wednesdays. Room M44

Second annual Student Byron Conference: ‘Byron Now’, May 23rd, 2012. Keynote speakers were David McClay, Curator of the John Murray Archive at the National Library of Scotland whose paper was entitled ‘Byron in the 21st Century: an archival perspective’ and international Byron scholar Bernard Beatty who spoke on ‘Byron’s moment and Byron’s Now’.

Wednesday 8 February 2012, Prof. Sharon Ruston (University of Salford), ‘Sublimation and the Sublime in the Poetry and Chemistry of the Romantic Period

Our EHUNineteen researchers lead specialist research-led modules at undergraduate and postgraduate level in long nineteenth-century studies. These modules include:

HIS2032: Digital Detectives – This second year optional history module explores the development of crime and punishment in the 18th and 19th centuries. It begins with a discussion of the ‘bloody code’ and public executions, before tracking transformations in punishment such as the introduction of transportation and imprisonment. It also considers the representation of crime and criminals in Victorian popular culture. The module is taught in computer labs and makes extensive use of digital tools and archives.

LIT2046: British Children’s Literature – This second year optional literature module explores British children’s literature from the eighteenth century to the present day, analyzing significant constructs of childhood from the Romantic child to the Victorian waif and beyond. Students study classics of the genre such as Lewis Carroll’s Alice in Wonderland as well as more modern examples such as Julia Golding’s The Diamond of Drury Lane, a historical novel focusing on life in 1790s London.

LIT2050: Romanticism – This second year literature period survey introduces students to the literature and culture of the Romantic period, 1750-1850, exploring representations of home and abroad, the literature of sensibility, the spirit of the age, as well as childhood, gender, and animal rights. Canonical Romantic poetry is studied alongside lesser-known examples of Romantic drama and historical fiction.

LIT2051: Rudyard Kipling – Rudyard Kipling is best known today for his Jungle Book tales and is often thought of as the leading voice in Victorian imperial propaganda. Yet Kipling was also a prolific writer of journalism, adventure fiction, gothic and supernatural tales, travel writing, poetry and more, and his relationship with empire is far more complex than is often acknowledged today. This course allows students to explore the many styles and genres of a prolific Victorian author, and to think about  Kipling’s influence on genres like children’s literature and the Gothic, as well as his reception and adaptation in modern culture and in discourses of race, racism and anti-racism, and nationhood.

HIS3038: Special Subject – Read All About It – This year-long research module explores the history of journalism and print culture, with a particular focus on the Victorian era. It examines the emergence of the popular press and discusses topics such as women’s magazines, investigative journalism, the provincial press, and the so-called ‘Harmsworth Revoltion.’ In the second semester, students undertake research on a project of their choice linked to the history of journalism. The module is taught in computer labs and makes extensive use of digital newspaper archives.

HIS3038: Special Subject – History of Interpersonal Violence – This year-long module examines the history of interpersonal violence in 19th and 20th century Britain. It begins with a broad theoretical examination of the definitions of violence, moral panics, the rise of new journalism, and the nature of masculinity. These theories will then be applied to historical analysis of particular forms of interpersonal violence, including gang violence, domestic violence, rape and murder.  The module encourages students to examine the extent to which interpersonal ‘violence’ is framed and defined less by everyday experience and more through the discourses and operation of the law and the print media. The courtroom and the newspapers can be interpreted as arenas in which this framing is played out, reinforced and modified. In the second semester, students undertake research on a project of their choice linked to themes of the module.

LIT3040: Victorians – This third year literature period survey analyses major Victorian authors like Charles Dickens and the Brontës in relation to significant cultural questions of the time, from evolution and empire to women’s rights; at the same time, the module also explores 19th-century popular culture and Victorian tastes for scandal, sensation, the supernatural, sex, and adventure.

LIT3045: Hosting a Literary Festival – This third year optional module offers students the opportunity to develop, plan, and host an event, celebrating a literary topic of their choice. Past events include a Festival of Forgotten Victorian Women, rediscovering significant women writers from the past and thinking about the future.

LIT3047 Postmodern Histories: Story and Memory – This module examines recent trends in literature that re-imagine historical figures and the space they occupy in cultural memory. With a particular focus on the nineteenth century, students will examine modern controversies for renowned Victorians like Lewis Carroll, as well as issues of truth and lies in Peter Carey’s rewriting of the mythology surrounding outlaw Ned Kelly and Margaret Atwood’s exploration of the fate of a sixteen-year-old ‘celebrated murderess’. This course considers postmodern (im)possibilities of life writing focusing on gaps and unresolved tensions that invite fictional retelling of the past in biofictions that transform the past for different desires and different times.

HUM4015: The Victorian City – This interdisciplinary MA module investigates the image and reality of the Victorian city in England. As a result of rapid industrialisation and urbanisation, urban centres became a source not only of interest but of fascination and anxiety in the nineteenth century. This engagement was vividly demonstrated in social accounts, journalism and popular fiction, particularly slum, detective and gothic fiction, through which social concerns about surveillance and safety were played out. The module brings together a range of historical, journalistic and literary documents from the period to facilitate students’ critical engagement with constructions of the city in the nineteenth century.

HUM4043 Neo-Victorian Fiction – This interdisciplinary MA module focuses on contemporary adaptation of the Victorian past. As part of a current trend of popularity for historical fiction, the Victorian period is crystallised as a site of creative and critical activity. The module investigates our enduring fascination with the Victorians considering the ways that nostalgia and self-conscious narrative experiment re-imagine an era.

HUM4046: Literature & Laughter – This MA level interdisciplinary module explores the theory and practice of the comic in nineteenth-century texts from the poetry of Lord Byron and novels of Jane Austen to Victorian print culture, joke books, and journalism.

For course enquiries, please contact the Course Information, Advice and Guidance Team on 01695 657000 or email study@edgehill.ac.uk.